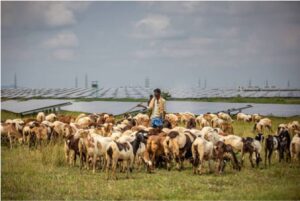 Poonam Chaudhary wanted to buy a home for herself. For this, she saved roughly Rs.8000 a month for about 10 years. Owning a home is the dream most middle-class young men and women aspire for in India. A home gives psychological comfort, security and adds to the standing in society.

A few months ago, her dream came true when she bought za three-bedroomed farmhouse. From inside her marble-lined kitchen, she can feast her eyes with the golden color skies at dawn and dusk. To add to her comfort, she has acquired two Japanese refrigerators and two TVs. An air-conditioner helps her to bear the scorching summer heat.

Power cuts of about two hours a day mars her feeling of comfort. The black out periods remind her that her country doesn’t produce enough power for meeting the needs of the people.

Perched inside mustard fields and mud tracks, her comfortable modern home symbolizes the gulf between the developed and still un-developed India. Similar dichotomy plagues scores of countries in other parts of the world.

At U.N. climate talks on Monday, Indian Prime Minister Narendra Modi announced the country will strive to reach net-zero emission level. Many activists had hoped that India will make it by 2050. He also stated that India would install 500 gigawatts of non-fossil, clean energy and meet half of its energy demands from renewable sources by 2030.

Modi’s announcement underscored India’s desire not to be seen as a laggard that was retarding the global push to combat climate change. But what he avoided to spell out is the near impossibility of abandoning coal as the primary source of energy in the coming decades when energy demand will gallop to record levels. Modi has demanded greater climate financing from developed countries. [Source : WP]

ALSO READ  Civil Service Vocabulary Exercise – 4
Share:
Do you plan to write Civil Service, or Management entrance examinations? Do you want to be an outstanding lawyer or a journalist, or an author? If so, you need impeccable English writing skills. We will build your skills step by step. Follow our blog daily. For more help, write to us through our mail id broadbase.knowledge@gmail.com
Subscribe
Connect withD
Connect withD
0 Comments
Inline Feedbacks
View all comments

Learn English online using our high-quality resources to steadily improve your English. This website is created for learners of English regardless of their age group and experience levels. This website will be useful for those looking to:

We can provide answers for any English Questions you have. You can request for answers by clicking on the request button below or by simply clicking here.

This website, created by a pool of IIT and IIM graduates seeks to arm the young learners with the skill to use English to win the race of life.

Learn more about us here.